Chapel of the Prodigal - Montreat College

Home » About » Locations » Montreat Campus (SAS) » Chapel of the Prodigal

Chapel of the Prodigal 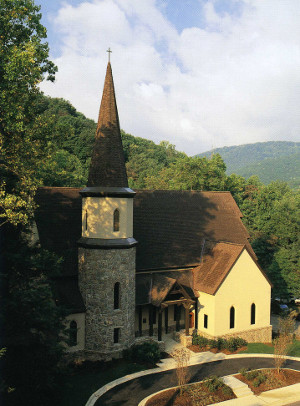 The Chapel of the Prodigal and the McGowan Center for Christian Studies is the embodiment of Montreat College’s mission. In mountain Gothic style the building houses both a chapel and educational facilities. The architect, Richard A. Henley of Charlotte, NC, has nestled the building into the gently sloping terrain and into the valley itself. The result blends into the college campus and enhances the greater Montreat community. Heavy timbers, over two hundred years old, are used for the roof trusses. The chapel is completed by an Allen Renaissance Organ and a splendid carillon which produces the sounds of sixty-one bells. On the chapel level is a Bride’s Room and a Groom’s Room. The Ruth Bell Graham Prayer Room on the chapel balcony level features the beautiful calligraphy “Come Unto Me,” a verse chosen by Mrs. Graham. The McGowan Center of Christian Studies on the ground floor provides a home for the college’s Christian Ministries Division and a place for teaching, study and reflection on God’s Word.

The Chapel of the Prodigal is open to the public Monday-Friday 9:00 a.m.-5 p.m. and Saturdays 10:00 a.m.-12 p.m. Guests are welcome to visit the Chapel at any time unless a college class is in session.

The Return of the Prodigal

The interior of the Chapel of the Prodigal was designed as a complementary setting and focus for the large fresco, the Return of the Prodigal, creating an intimate, yet uplifting worship space. Montreat’s fresco is sixteen feet wide by seventeen and one-half feet tall and portrays the parable found in Luke Chapter 15. After squandering the inheritance he demanded from his father, the prodigal son returns home from a far country seeking forgiveness and acceptance. The father receives him with love and joy, reestablishing his place in the family. This parable of the unconditional love of God is considered by many to be the greatest story Jesus told. Montreat’s artistic interpretation is the only known true fresco by a master artist on the theme of the parable of the Prodigal Son. The Return of the Prodigal is Long’s first fresco on a wall built to his specifications. 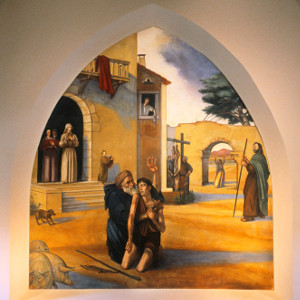 True fresco is a complicated and tedious technique. Powdered pigments suspended in pure water are applied to wet lime plaster. The pigments are absorbed into the plaster that cures to a rock hard crystalline surface becoming more luminous over time. The art of fresco was known in many ancient cultures, yet it was during the Italian Renaissance that true fresco achieved its greatest glory. Although never fully abandoned, this great art form is recovering in our time with renewed vigor. Ben Long is one of only a few master fresco artists working today. A North Carolinian, he began his art career  with an apprenticeship under Maestro Pietro Annigoni in Florence, Italy. He has since achieved international fame as a master of both true fresco, drawing and oil painting. His excellence in the field of fresco painting has resulted in numerous commissions worldwide including Italy, France and seven sites in North Carolina.

This website uses cookies to improve your experience while you navigate through the website. Out of these cookies, the cookies that are categorized as necessary are stored on your browser as they are essential for the working of basic functionalities of the website. We also use third-party cookies that help us analyze and understand how you use this website. These cookies will be stored in your browser only with your consent. You also have the option to opt-out of these cookies. But opting out of some of these cookies may have an effect on your browsing experience.
Necessary Always Enabled
Necessary cookies are absolutely essential for the website to function properly. This category only includes cookies that ensures basic functionalities and security features of the website. These cookies do not store any personal information.
Non-necessary
Any cookies that may not be particularly necessary for the website to function and is used specifically to collect user personal data via analytics, ads, other embedded contents are termed as non-necessary cookies. It is mandatory to procure user consent prior to running these cookies on your website.
SAVE & ACCEPT