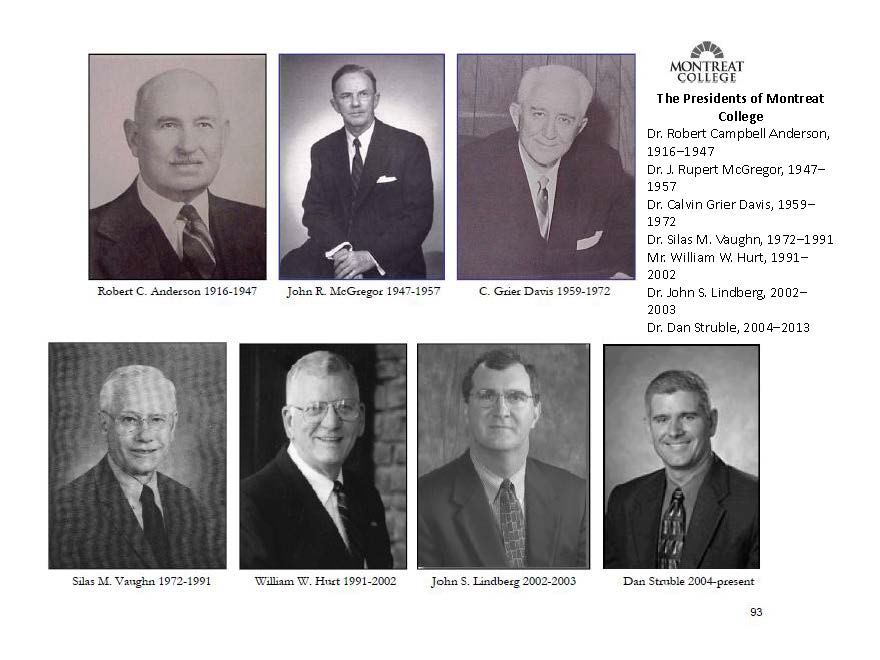 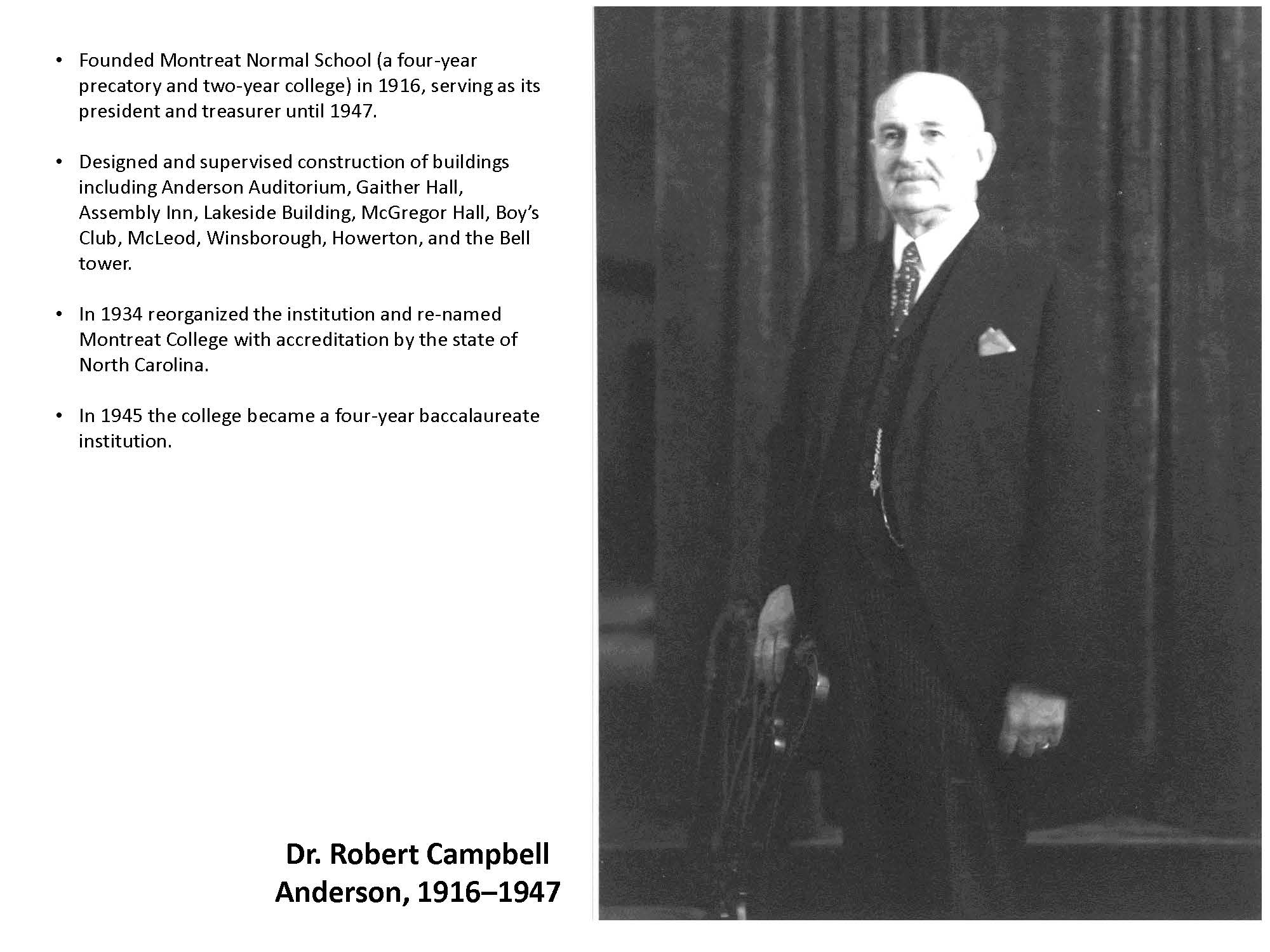 Dr. Robert Campbell Anderson, President of Montreat College from 1916 to 1947. In 1934 Montreat Normal School was renamed Montreat College. Dr. Anderson came to Montreat in 1911 as president of the Mountain Retreat Association (MRA) and served as dual president of both Montreat College and the MRA until his retirement. He designed and supervised construction of many of the college’s facilities, including Anderson Auditorium, Gaither Hall, McGregor Hall, McLeod, the Bell Tower, Howerton Hall, and other MRA buildings. Montreat Normal School was originally a two-year teacher preparatory school and high school. It was reorganized in 1934 and renamed Montreat College with accreditation by the state of North Carolina. By 1945, the college had become a four-year baccalaureate institution. 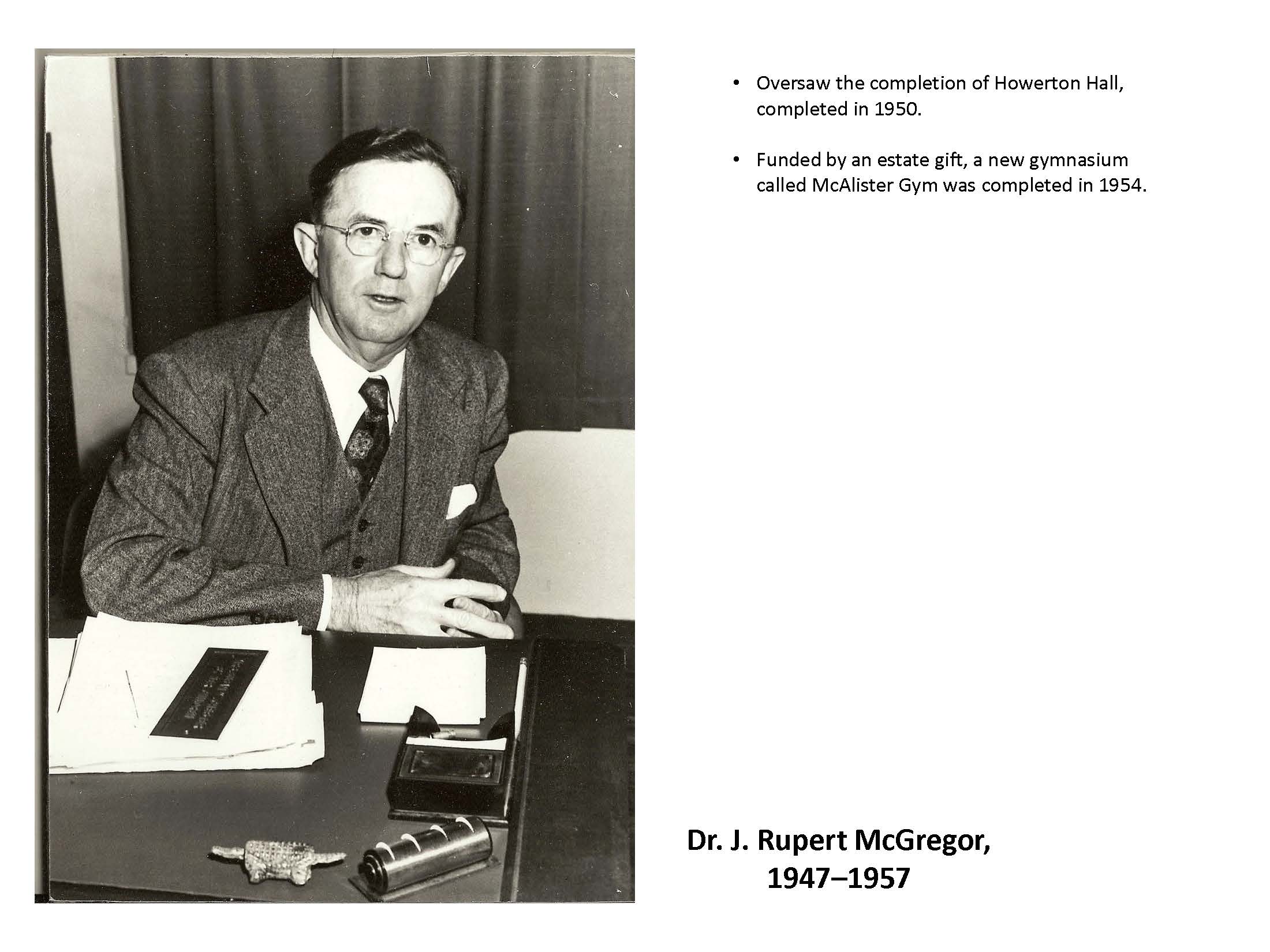 Dr. J. Rupert McGregor, President of Montreat College from 1947 to 1957. Dr. McGregor had served as pastor of two N.C. Presbyterian congregations before serving at the Highlands Church in Birmingham, Alabama. He oversaw the completion of Howerton Hall in 1950. McAlister Gymnasium, funded by an estate gift of Mrs. Amelia McAlister Upshur, was completed in 1954. The high school was discontinued in 1956. 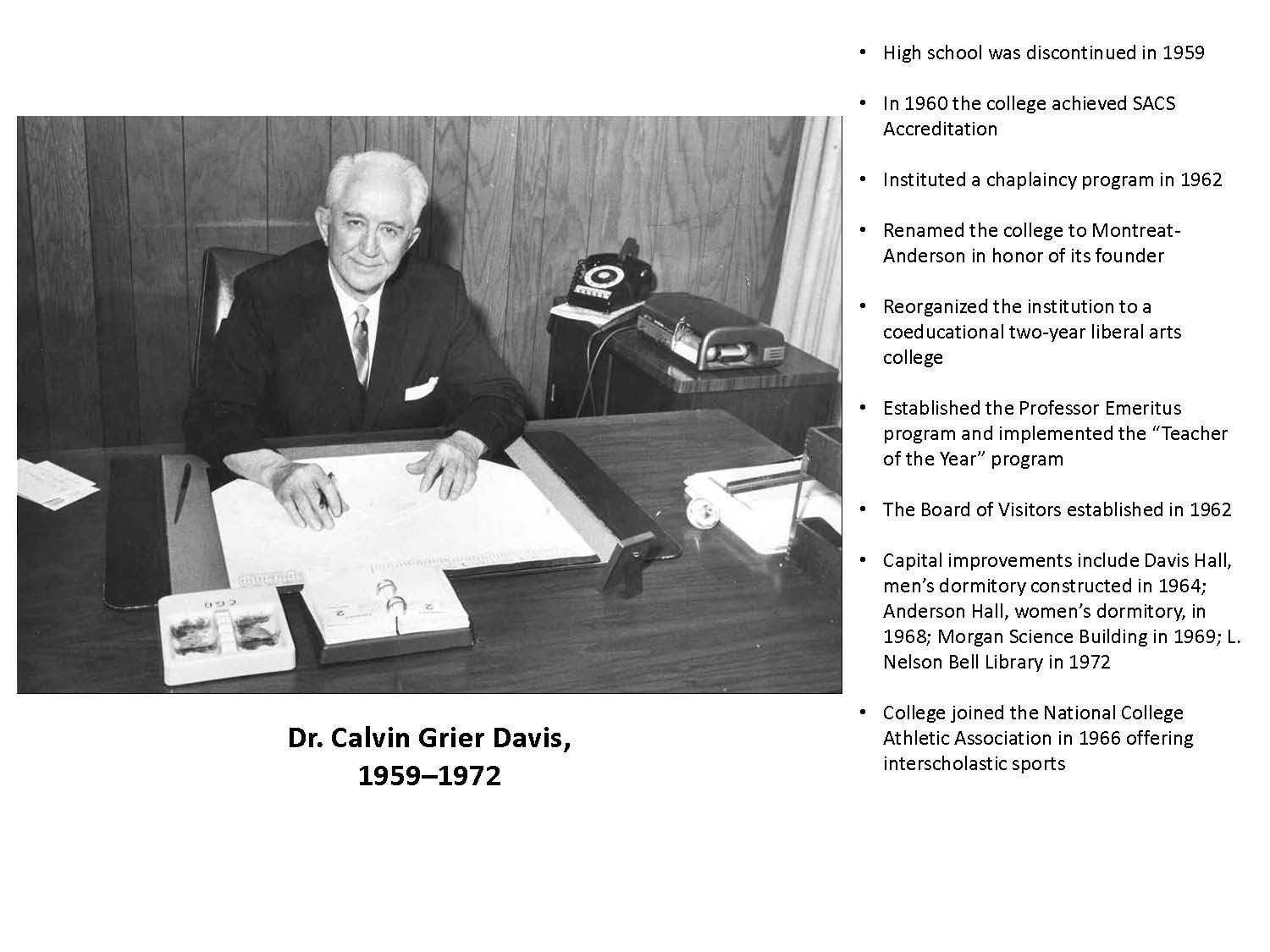 Dr. Calvin Grier Davis, President of Montreat-Anderson College from 1959 to 1972. In 1959 the College was restructured as a coeducational junior college and was named Montreat-Anderson College. Dr. Davis came to the presidency after pastoring First Presbyterian Church in Asheville. During his administration, the college achieved accreditation from the Southern Association of Colleges and Schools, instituted a chaplaincy program, reorganized to a coeducational two-year junior liberal arts college, and renamed the school Montreat-Anderson College in honor of its founder. Dr. Davis established the Professor Emeritus program, implemented a “Teacher of the Year” program, and established a Board of Visitors in 1962. Capital improvements under Dr. Davis included Davis Hall, completed in 1964, Anderson Hall in 1968, Morgan Science Building in 1969, and the L. Nelson Bell Library in 1972. The college began offering interscholastic sports and joined the National College Athletic Association in 1966. 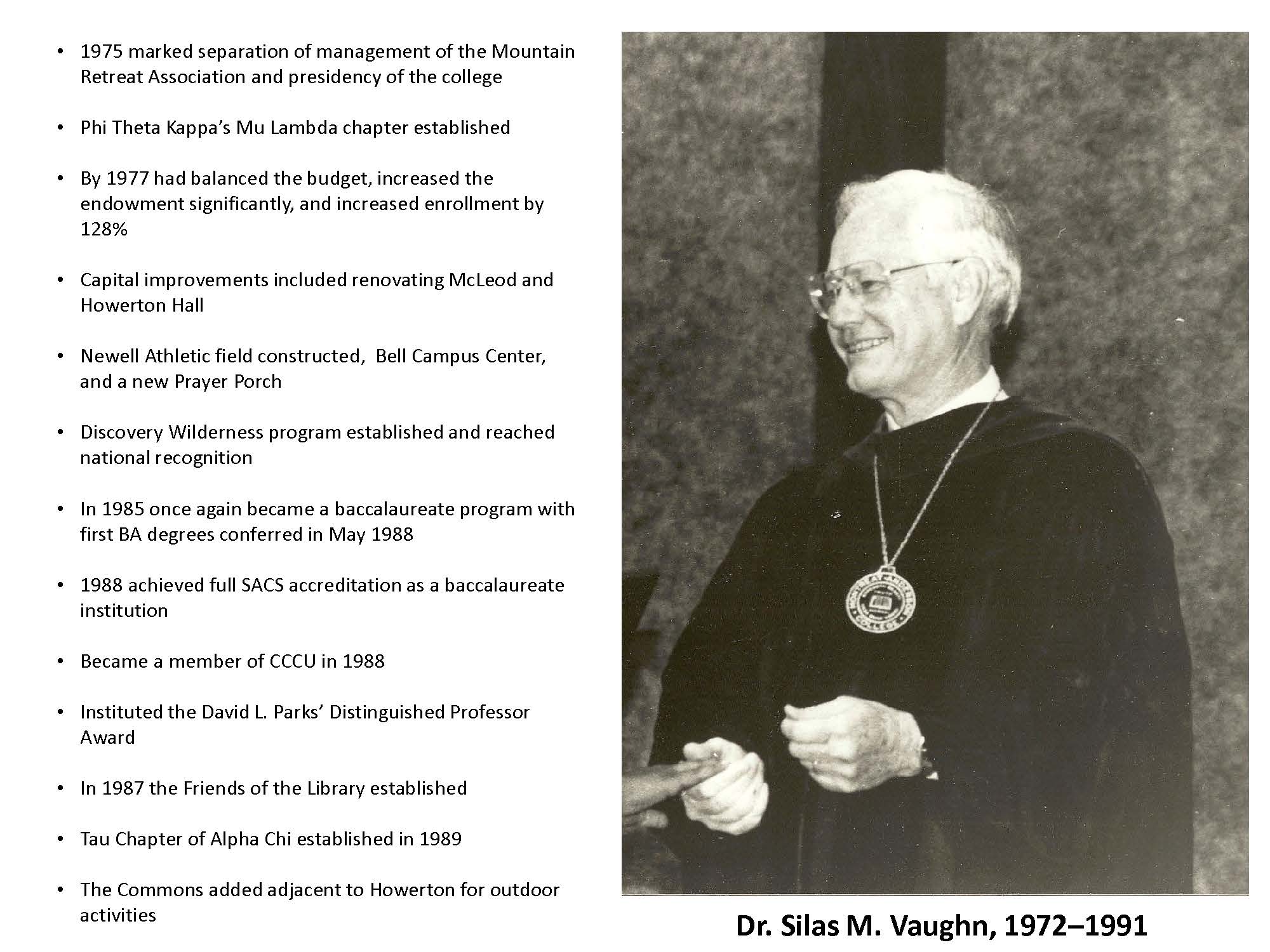 Dr. Silas M. Vaughn, President of Montreat-Anderson College from 1972 to 1991. In 1975, Dr. Vaughn achieved the separation of the management of the Mountain Retreat Association and presidency of the college. By 1977, he had balanced the budget, increased the endowment significantly and increased enrollment by 128%. The Phi Theta Kappa’s Mu Lambda Chapter was established and the Discovery Wilderness program was implemented, achieving national recognition. Capital improvements included renovating McLeod and Howerton Halls, construction of Newell Athletic field, Belk Campus Center and a new Prayer Porch. The Commons was added adjacent to Howerton for outdoor activities. In 1968, the college once again became a baccalaureate institution with the first B.A. degrees conferred in May 1988. Full Southern Association of Colleges and Schools accreditation as a baccalaureate institution was achieved, and Montreat became a member of the Council of Christian Colleges and Universities (CCCU) in 1988. The David L. Parks’ Distinguished Professor Award was instituted, and the Friends of the Library was established in 1987. Tau Chapter of Alpha Chi Honor Society was established in 1989. 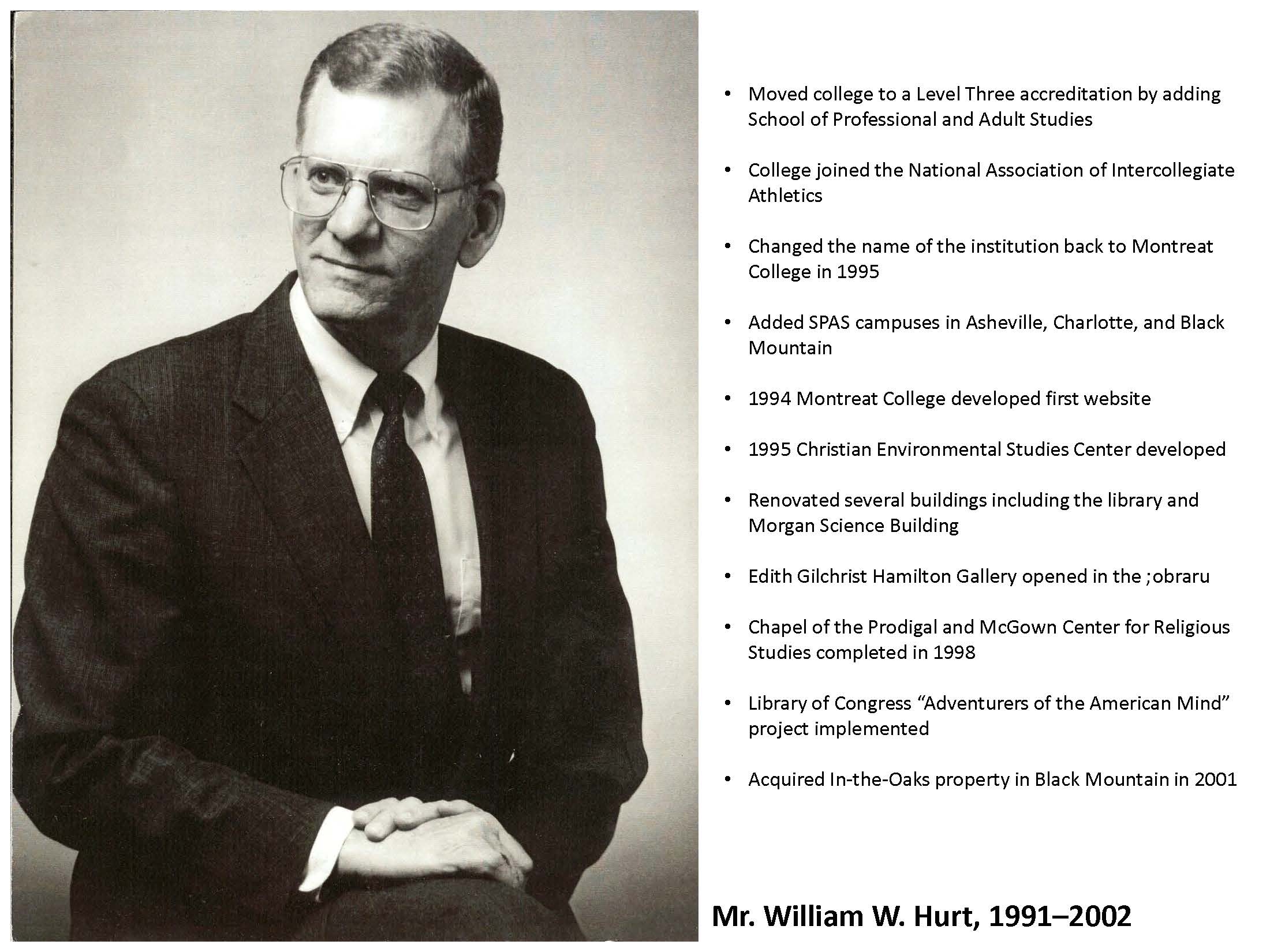 Mr. William W. Hurt, President of Montreat College from 1991 to 2002. Montreat-Anderson College became Montreat College in 1995 during President Hurt’s administration. The change reflected a growing college with several campuses and a graduate program. His administration moved the college to a “Level Three” accreditation by adding the Montreat College School of Professional and Adult Studies (SPAS) in September 1994. The College joined the National Association of Intercollegiate Athletics and changed the name of the institution back to Montreat College in 1995. SPAS campuses were added in Asheville, Charlotte, and Black Mountain. In 1994 Montreat College developed its first website. The Christian Environmental Studies Center was developed in 1995 reaching national acclaim, and the Library of Congress “Adventures of the American Mind” project was implemented. The 1999 Commencement included 45 Master of Business Administration recipients of Montreat’s first graduate program, and by 2000 enrollment had reached over 1,000. Capital improvements included the renovation of the Bell Library and Morgan Science Building. The Edith Gilchrist Hamilton Gallery opened in the library. The Chapel of the Prodigal with the fresco painted by internationally known artist Ben Long and the McGowan Center for Religious Studies were completed in 1998. The 72-acre property of In the Oaks in Black Mountain was acquired in 2001. 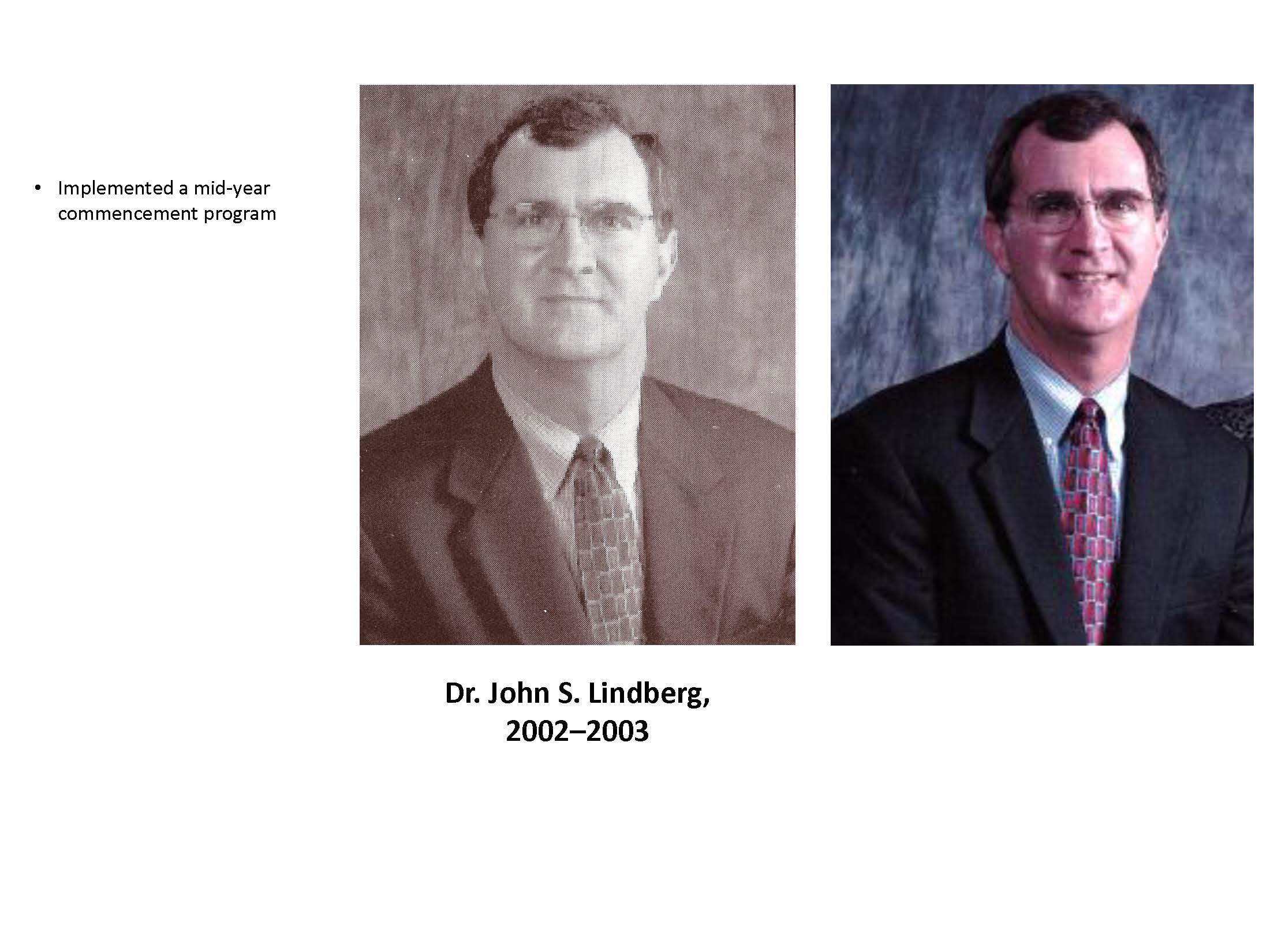 Dr. John S. Lindberg, President of Montreat College from 2002 to 2003. He implemented a mid-year commencement program as the number of graduates in the School of Professional and Adult Studies program had grown. The Theater Arts series was established in 2003. 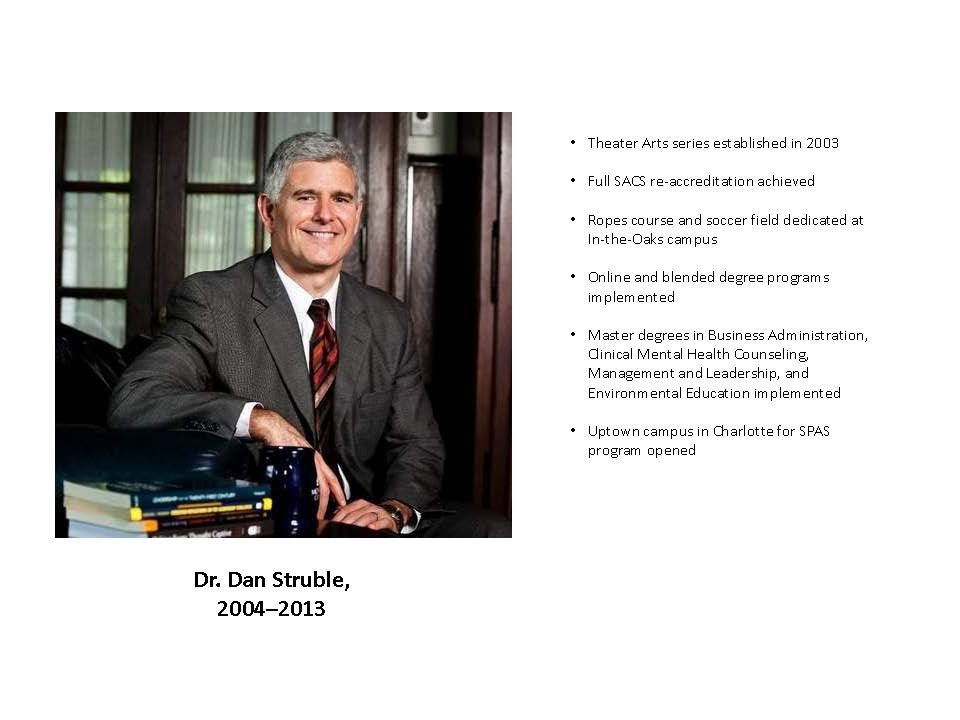 Dr. Dan Struble, President of Montreat College from 2004 to 2013. During his administration, full Southern Association of Colleges and Schools reaccreditation was achieved. A 10 Megabit/second network to connect all four campuses was implemented. Enrollment had exceeded 700 students for the first time, and the School of Arts and Sciences (SAS) enrollment reached 494 for a record overall enrollment of 1253. Master’s degrees in business administration, clinical mental health counseling, management and leadership, and environmental education were implemented. An uptown campus in Charlotte for the SPAS program was opened. In 2010, the first graduate program in SAS was launched with the Master of Science in Environmental Education. Three additional SPAS campuses were opened in Raleigh, Rocky Mount, and Morganton. The sixteen acres contiguous to the Black Mountain campus were purchased, and an extensive challenge course was constructed there. A soccer field was dedicated at the Black Mountain campus, and a Montreat apartment building was purchased to supplement student housing. 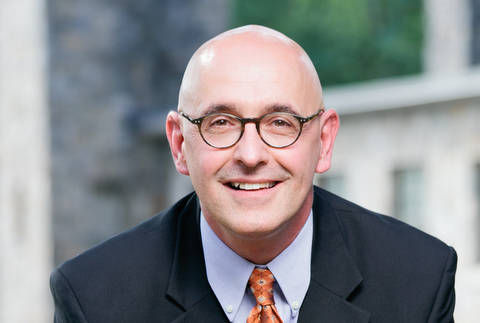 Dr. Paul J. Maurer, President of Montreat College from July 21, 2014 to present. He brings a wealth of experience in both adult and undergraduate education, having served as a college president, a senior vice president in external relations, and in other advancement roles, all at Christian colleges. During his tenure, a Cybersecurity program was developed and expanded, a state-of-the-art track field and athletic complex was added on the Black Mountain campus, Major renovation of campus residence halls and dining hall were completed, a fully renovated and equipped fitness center was added in McAlister Hall, and the college’s core values were articulated. He was responsible for bringing major donations from new donors who support Christian higher education.