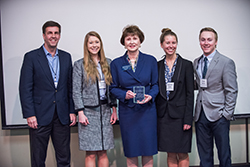 Montreat College reached the semifinals of North Carolina Independent Colleges and Universities’ fifth annual Ethics Bowl held February 5 and 6 on Meredith College’s campus. Montreat was defeated in the semifinal round by eventual winner Barton College. Twenty-two colleges and universities from throughout North Carolina participated in the event, including Wake Forest University, High Point University, and Campbell University. This year’s focus was on the theme of Ethics in Technology.

Montreat College advanced to the semifinals after having accumulated the second-most points in the preliminary four rounds of competition, in which they went 4-0. The topic for the semifinal case was “Civil Disobedience, Free Speech, and Technological Protest against Questionable Practices.” The teams responded to the question: “Is it ethical to hack and publish documents deemed by the hacker to reveal immoral, unethical, or illegal activity?”

The judges, who were made up of business and community leaders, praised the teams for their thoughtful arguments and broad knowledge of the topics which they demonstrated by using relevant historical facts to state their case.

“The Ethics Bowl participants get stronger every year,” said Hope Williams, president of NCICU. “This is such a valuable experience for these students – not only does it increase awareness and discourse among students and business and community leaders, but the months of preparation strengthen all the students’ academic endeavors.”

“I could not be more proud of the team,” said Coach Mark Wells. “We were certainly one of the smallest colleges at the competition, but we really showed how great Montreat College is at this competition, earning the respect of every team we faced.”

“Competing in the Ethics Bowl is a highlight of each year,” said Montreat College senior competitor Joseph Madsen. I think what makes Ethics Bowl so valuable is how it combines some of the most important aspects of a liberal arts education. What do you believe? Why do you believe it? How will you defend and support that belief? As a Business Administration major, the path toward my degree has been marked by a focus on ethics; no degree is complete unless you have developed a set of beliefs on how you will respond to pressures in the workplace. The Ethics Bowl is where the rubber meets the road and it is the best way that I can think of to prepare for a life and career of difficult decisions.”

The Ethics Bowl is made possible by more than 30 corporate and individual sponsors. “We are so grateful to all our sponsors for making this event possible,” said Dr. Williams, “and especially to Duke Energy and Wells Fargo, our presenting sponsors.”

A banquet for team members, coordinators, judges, moderators and sponsors was held Friday evening at the North Carolina Museum of History. Aaron Keane of Trailblazer Studios was the keynote speaker.