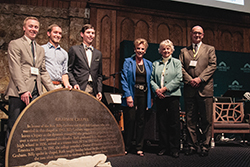 This past Friday, as part of a day-long event honoring the lives and legacies of Billy Graham and L. Nelson Bell, Montreat College changed the name of its primary chapel from “Gaither Chapel” to “Graham Chapel” in honor of the Rev. Billy Graham and Ruth Bell Graham, who were married in the chapel in 1943. The larger building in which the chapel is housed will retain the name “Gaither Hall” in memory of Thomas and Betty Gaither—parents of Sadie Gaither Anderson, wife of the Montreat College’s first president, and great supporters of the college.

Montreat College President Paul J. Maurer announced the re-naming at the close of Friday’s Bell/Graham Day events “in honor of this day and in honor of the legacies that the Bell and Graham families have had at this college.”

“I can’t think of anything that would please my parents more, especially my mother,” said Virginia “Gigi” Graham, eldest daughter of Billy and Ruth Graham, at Friday’s ceremony. “This was just so much home for her, this chapel. And of course, when daddy was in town, he’d come here, too.”

The plaque unveiled on Friday, which will hang over the entrance to the chapel, contains the following inscription: “Graham Chapel: In honor of the Rev. Billy Graham and Ruth Bell Graham, who were married in the chapel in 1943. Billy Graham, supported by his wife, Ruth, leaves a legacy as the dynamic evangelist who preached the gospel to millions over a career that spanned six decades. Ruth graduated from Montreat College’s high school in 1936, served as a trustee from 1972 to 1981, and was named Trustee Emerita in 1981. In 1991, the college awarded a Doctor of Humane Letters to Rev. Graham. Billy spoke in chapel, Ruth taught Sunday school for the college’s students, and the two of them often ministered to students in their Montreat home.”